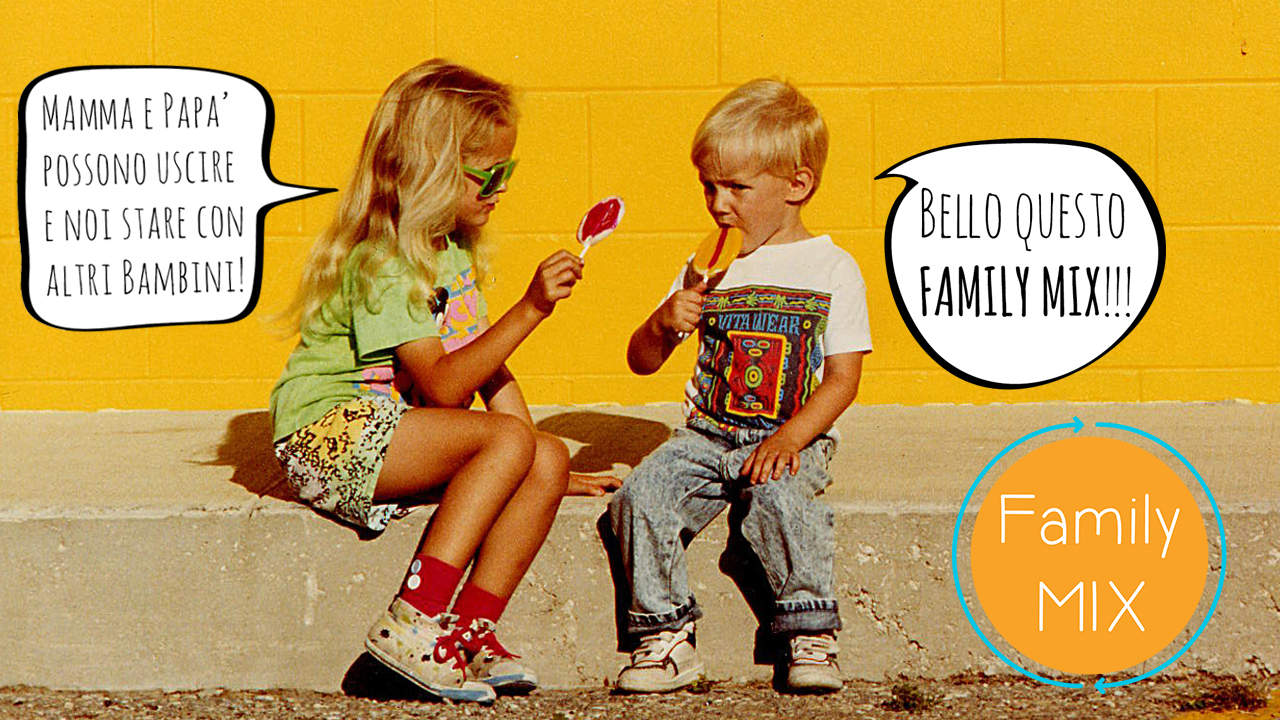 Chiara and Eva: “Family mix” is ​​“a babysitting exchange network which, by sharing one’s time, offers parents moments of freedom in total safety, and to children moments of fun with some friends. Through an App, it allows you to get in touch with the families of trusted people willing to keep your children for a day, an afternoon, an evening, a special occasion. An easy, accessible, safe and organized reciprocal help among families, just one click away!” this is how we have described this idea of ​​sharing economy on our website.

Chiara: Family Mix began as an idea that has remained in my head for years, and sprung from finding myself with two children, many friends we helped and helped us in return, but only for necessary things, never for having some free time. I thought that there could be a system through which to ask without having to justify yourself, the platform put everyone on the same level, keeping the children of others became an exchange and no longer favour, offering children a moment of positive sociability. At one point I took courage, wrote the project and participated in a Social Hub incubator contest. I was among the 5 winners and the adventure began. At this point, I ask my friend Eva Perasso to join the team. There was no clear business idea, we wanted to keep everything free and this prevented us from finding financing. We also won a contest by Tim to activate crowdfunding, but we collected less than I expected, despite our great commitment, even on vacation. From that moment we have slowly abandoned the project, without declaring its end.

Eva: Chiara Capini and I met because our children attended the same classes, we were class representatives and then joined the parents’ committee of the institute. Chiara had the idea and won the competition for innovative ideas Social Hub in Genoa. The project was selected for the incubator, and she told me about it and for me, it was love at first sight. Then the team expanded when Fabrizio Tubertini joined us and helped us to develop all the business part. It was used to develop family networks, a social network of circles of friends within which you moved to ask for time availability. We had worked hard on the well-being and safety of the child, on the system to access, to apply, to get to know others, and took various steps, interviews. Think how useful it would be when you move to a new house, maybe a new city and you don’t know anyone who can help you.

With Chiara we created the site, participated in contests, organized meetings and set up a crowdfunding project, accompanied along the way by an incubator, we worked for a couple of years, and with the money from the fundraiser, we paid the costs of promotion and development of the App, created in beta, just when the energies were starting to fail.

2017 was a year of great life changes for both of us. Little by little, we no longer put in the energy, we started postponing meetings and activities and almost without realizing it, in any case without ever saying “it’s over”, we somehow dropped it.

Its incompleteness is still painful, we still consider it an excellent project that could start again in the future, a project that involved and entertained us a lot, allowing us to get to know many people and enter interesting circuits of the sharing economy.

Chiara: What I wonder is why no one else has thought about it, why no one has created a time-sharing project dedicated to children.

I’m waiting to no longer need it directly, to no longer be involved in the first person, and then relaunch it. I also thought of turning to a public institution, which might be interested in offering parents a tool for help and support.

For Family Mix, completion would have been a widespread project. I dreamed of a national network (and beyond) made up of many small communicating cells. At that moment I could have let it go.